White Lead - Its Use in Paint Horton Sabin Alvah 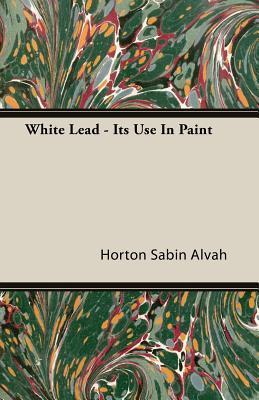 It is spoken of in the book of Genesis, and in the book of Ezekiel it is noted that fire will burn it to dross, which is litharge and various uses of it are men tioned in the Old Testament. The Assyrians used it, as we do now, to secure iron bolts in holes drilled in rocks and building-stones the Greeks, and probably many other nations of antiquity, were acquainted with white-lead and red-lead. The Romans used lead-pipe for city water-works, and understood not only soldering, but the more difficult art of lead-burning, which consists in fusing to gether two adjacent edges of sheet-lead with a blowpipe and in themiddle ages, sheet Preface v lead was frequently used, as it is somewhat rarely now, for roofing material.

From that time to the present, the increase in the variety of uses for this metal has merely been such as has taken place with use of materials of all sorts, as civilization and knowledge have progressed. It is now used in antifriction metals as packing for pipe-joints stained glass in windows is bound together with leaden kames lead wire makes fuses for electric light wiring it is a necessary ingredi ent in rubber wares, and in enamels and vitreous glazes type-metal contains it, and storage-batteries young men use it to weight the lines for catching fish, and ladies use similar weights in the hem of their skirts to give them an attractive appearance, and in all cases it gives satisfactory results but the largest single use is in white-and red-lead for paint.

vi Preface In the Prologue to the Canterbury Tales, written about 1386, Chaucer enumerates among standard medicinal drugs quicksilver, litharge, brimstone, ceruse i. e., white-lead, and borax, which is the earliest English men tion of lead compounds for this purpose that has come to the writers notice.

About 1525 the celebrated physician, Paracelsus, who first systematically used chemistry in medi cine, speaks of white-lead, litharge and red lead as well-known and necessary medicines, and in 1585 a medical treatise by Lloyd says that white-lead dropped into the eyes takes away the pain and clears the eyes.

But in general it is spoken of as paint and paint does not appear to have been used as a pre servative, as we use it now, but primarily for decoration and especially as a cosmetic. From this latter use comes the implied meaning of deception thus Chaucer, in the Par sons Tale Paint thy confession by fair Preface vii words to cover thy sin, and in 1456 Sir G.

Haye This story is painted in many places in 1519, Herman They white their face and neck with ceruse in 1599, Chapman says She is very fair, I think she be painted and Hcxham To paint ones face as gentlewomen do and Fletcher in 1622 I dare tell you To your new cerused face, what I have spoken Freely behind your back...

Comments
Comments for "White Lead - Its Use in Paint":