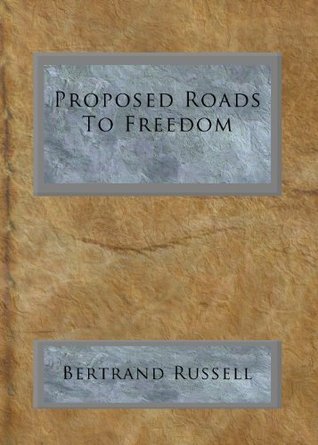 Whoever contemplates the world in the light of an ideal--whether what he seeks be intellect, or art, or love, or simple happiness, or all together--must feel a great sorrow in the evils that men needlessly allow to continue, and--if he be a man of force and vital energy--an urgent desire to lead men to the realization of the good which inspires his creative vision.

It is this desire which has been the primary force moving the pioneers of Socialism and Anarchism, as it moved the inventors of ideal commonwealths in the past. In this there is nothing new. What is new in Socialism and Anarchism, is that close relation of the ideal to the present sufferings of men, which has enabled powerful political movements to grow out of the hopes of solitary thinkers.

It is this that makes Socialism and Anarchism important, and it is this that makes them dangerous to those who batten, consciously or unconsciously upon the evils of our present order of society.The great majority of men and women, in ordinary times, pass through life without ever contemplating or criticising, as a whole, either their own conditions or those of the world at large.

They find themselves born into a certain place in society, and they accept what each day brings forth, without any effort of thought beyond what the immediate present requires. Almost as instinctively as the beasts of the field, they seek the satisfaction of the needs of the moment, without much forethought, and without considering that by sufficient effort the whole conditions of their lives could be changed.

A certain percentage, guided by personal ambition, make the effort of thought and will which is necessary to place themselves among the more fortunate members of the community- but very few among these are seriously concerned to secure for all the advantages which they seek for themselves.

It is only a few rare and exceptional men who have that kind of love toward mankind at large that makes them unable to endure patiently the general mass of evil and suffering, regardless of any relation it may have to their own lives. These few, driven by sympathetic pain, will seek, first in thought and then in action, for some way of escape, some new system of society by which life may become richer, more full of joy and less full of preventable evils than it is at present. But in the past such men have, as a rule, failed to interest the very victims of the injustices which they wished to remedy.

The more unfortunate sections of the population have been ignorant, apathetic from excess of toil and weariness, timorous through the imminent danger of immediate punishment by the holders of power, and morally unreliable owing to the loss of self-respect resulting from their degradation. To create among such classes any conscious, deliberate effort after general amelioration might have seemed a hopeless task, and indeed in the past it has generally proved so.

But the modern world, by the increase of education and the rise in the standard of comfort among wage-earners, has produced new conditions, more favorable than ever before to the demand for radical reconstruction. It is above all the Socialists, and in a lesser degree the Anarchists (chiefly as the inspirers of Syndicalism), who have become the exponents of this demand.