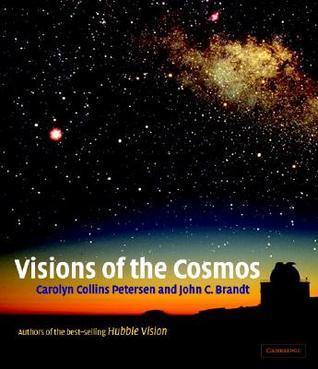 Featuring the latest and most stunning images, it provides a magnificent picture of the beauty of the cosmos. The accompanying text is an accessible guide to the science behind the wonders and includes clear explanations of all the major themes in astronomy. An essential guide to understanding and appreciating the Universe, Visions of the Cosmos builds on the success of the authors previous book, Hubble Vision, which became an international best-seller and won world-wide acclaim.

Carolyn Collins Petersen is a science journalist and creator of educational materials for astronomy. She is the former Editor of Books & Products at Sky Publishing Corporation, and served as Editor of SkyWatch and Associate Editor of Sky & Telescope magazines. Petersen is the lead author of the book Hubble Vision, first published in 1995 by Cambridge University Press, and co-written with Dr.

John C. Brandt. She is also co-editor (with J. Kelly Beatty and Andrew Chaikin) of The New Solar System, fourth edition, co-published by Sky Publishing Corporation and Cambridge University Press. John C. Brandt has held positions as a research scientist, teacher, and administrator, and is currently an adjunct professor of physics and astronomy at the University of New Mexico.

He served for 20 years as Chief of a major NASA scientific laboratory and was the Principal Inverstigator for the Goddard High Resolution Spectograph on the Hubble Space Telescope. John received the NASA Medal for Exceptional Scientific Achievement in 1978 and 1992, and has had a minor planet formally named after him (3503 Brandt) for his fundamental contributions to understanding of solar system astrophysics.

Comments
Comments for "Visions of the Cosmos":