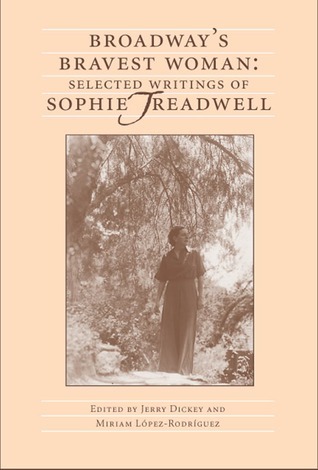 Broadway’s Bravest Woman: Selected Writings of Sophie Treadwell is the first critical compilation of her prose and drama and highlights the most significant and formerly unavailable pieces of her work. Editors Jerry Dickey and Miriam López-Rodriguez place Treadwell within the context of the early twentieth century and outline four themes that infused her feminist ideology: the social positioning of women, ethnic identity in the United States, tensions between modern progressivism and conservatism, and the individual’s role in the face of social justice.Treadwell’s critical reputation as a dramatist is largely based on the success of the 1928 expressionist drama Machinal, but little is known about her other dramas, much less her fiction and journalism.

Drawing largely upon unpublished manuscripts, this volume documents the breadth of Treadwell’s work, from an investigative newspaper serial written in 1914 to selections from an autobiographical novel completed during World War II, which chronicled her development as a feminist.In the introduction, Dickey and López-Rodriguez present a detailed portrait of Treadwell’s sensational but critically neglected journalistic career, from her 1915 serial on social welfare for prostitutes in San Francisco to her 1921 ground-breaking story on the Mexican revolutionary leader Pancho Villa. They also outline the personal and social factors that helped shape Treadwell’s feminist ideals.Expanding the awareness of the feminist writer’s accomplishments, Broadway’s Bravest Woman is critical resource for students, scholars, and theatre artists.

The collection, enhanced by six illustrations, not only offers the most complete portrait of Treadwell to date as a significant feminist voice in modern America but also provides a glimpse into the social life and international relations of the United States in the interwar period of the twentieth century.